Yep, here I am again, enjoying the all inclusive service in a hospital. This time I am staying in the hotel, oh sorry, in the hospital in České Budějovice (web not in English, sorry), where my parents live. The original plan was to arrive with Ema by train to my parents on Friday, October 7th and on Saturday to run with my dad, cousin, her boyfriend and million friends Night Run (10 km through the town in the dark with head lights). Then stay with my parents till Sunday and then travel back to Prague. Sounds nice, huh? Only it changed a bit. Well, a lot.

Already in the middle of our ride in the train I started to feel unwell. I felt cold, tired and my joints started to hurt a lot. That never signs anything good but sometimes it just means that I am too tired and that I should rest a lot. As I was working really a lot during the previous few days, I thought (and hoped) this might be the case. So as soon as we arrived to my parents, I told them I needed to rest, ate awesome hot cauliflower soup from my mom, took a hot bath (and painkiller pill just in case) and went to bed. At 5 pm. Whatever! When I need it, I just need it.

When I woke up, I felt perfectly fine so I ate some other great meal from my granny, made me hot tea and joined others in grannys living room for talking. We were there almost by midnight and I still felt good so I thought all was fine.

But of course, it wasn’t. At 2:30 am I woke up with terrible pain in joints and with rigor. I thought I was gonna freeze. So I took thermometer and measued my temperature. When it showed 38.6 degrees, I went for some pain and fever killer pill and went back to bed, knowing that in the morning I would have to go to hospital.

In the morning I told my parents and so we went. It is always better to go as soon as possible so the inflammation doesn’t become too strong. When the doctor heard that I had transplanted kidney and fever, he immediately asked me if I agreed with hospitalization. To be honest it shocked me a bit. I mean, I knew that it was probable that they would want to hospitalize me but the doctors always take my blood and urine first and wait for results before they suggest this.

This doctor did nothing like that and just decided to keep me in the hospital based on that I have a transplanted kidney and that I was claiming that I had fever at night (which I didn’t have at the moment as I was under the medication from night). I could clearly see on him how he was scared that he actually had to deal with someone with transplanted kidney. Oh well, I can’t blame him. He was young and probably didn’t have experience with this yet.

Anyway, I went through the whole hospitalization process (it took like more than 1.5 hour and still no tests), got me one bed room (yay!) and got some medication for lowering temperature (which increased to 38 again by that time) and for hydratation. Then they finally took my urine and blood (I must say that maybe for the first time in my life I was happy that someone finally did it! :D).

After few hours they informed me that CRP was 70 (wow, last time it was 300) and creatinine was 100 (phew) and that it clearly is some kind of inflammation but they don’t know which and where (as always) so they started to give me some wide range antibiotics with hope that they will be the right ones for the specific bacteria I had.

They also started to give me the hydrocortisone which is a medication which helps to fight the inflammation but one of the side effects is that it blows up the sugar level in your blood. So the glycemia is like on the roller coaster. Which in very unfortunate as two weeks ago I was on a check at my diabetes doctor and he told me that my diabetes is finally (after about half a year, well, actually from the last hospitalization) under control and more or less in normal values. So, when they release me, I will have to start all over again from the very beginning. Yay!

They were giving me this treatment during the whole weekend until they found out on Monday that CRP increased to 150 and that they had to change the antibiotics to different, more specialized ones. Which meant the whole weekend treatment was almost for nothing. Well, not for nothing, but could have been better if they decided for different type of antibiotics. Unfortunately this is always the risk at the beginning untill they get the results from the tests.

So from Monday I am getting the right treatment and I was hoping that maybe on Friday they could switch the intravenous antibiotics for pills and release me home. Haha. Today the doctor came to me and informed me that she had a discussion with my doctor at IKEM who told her that he would like me to be taking these antibiotics intravenously another 7 DAYS! Unfortunately there are no pills with the same effective component I need. Very good to know.

It looks like instead of visiting České Budějovice for 2 days, I might be staying here for almost two weeks. OMG. Fortunately my mom borrowed me her laptop (I think its around ten years old and incredibly slow) and they have internet here in the hospital (slow but stable at least) so I can at least work here which makes me really feel better mentally. Mom and dad are visiting me every day and thanks to the laptop I was also able to make a skype call with Ema yesterday which cheered me up a lot. She is just the real sun shine in my life.

I have to admit that I was really sad and desperate this morning when the doctor told me about this and I cried a lot. But then I was thinking about it and realized that being desperate and crying helps to solving nothing, maybe it even makes things worse because the body is under stress. Yes, it helped me to get over the information and calmed me so I slept a lot but I think it’s time to turn the page. I can rest a lot here, read books, write this blog, read magazines or facebook, even work if necessary, so I should just enjoy the moment as much as I can. Nothing that bad is happening.

The kidney was not harmed, the creatinine was 70 today, and I will get better. They will heal me and I will come back to my normal hectic life again. Sooner or later but I will. This was not the first not the last hospitalization in my life whether for bladder inflammation for other illness. It belongs to my life because of all the medication including immunosuppression which helps to protect the transplanted kidney and I just have to accept it.

A little update – Sunday, October 16th: This morning I woke up all swollen and whole my body was covered with red spots which were itchy like hell. The doctors claimed that it looked like allergy to the antibiotics I was treated with so they stopped immediately with them and started to heal these allergy symptoms which were pretty strong to be honest. 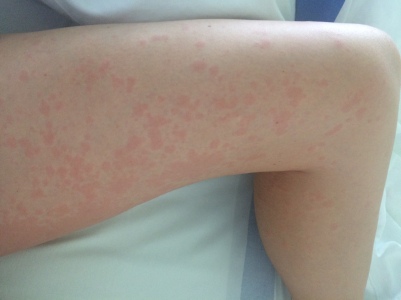 So instead of bladder inflammation, which seems to be cured already, I am now being treated with hydrocortizone (even more than before) and dithiaden which is an antiallergic pill. With hope that if everything is ok, they will release me from the hospital on Thursday. Please let it be.

So far I managed to read 4 books, millions of magazines about health, cosmetics, fashion, exercise, love stories and various other themes (I’m a bit scared that my IQ decreased a lot), worked a bit and became terrible lazy from the forced laying in bed. It’s just about the right time to go back to normal life!