I started to run in 2011 about half a year after my daughter was born and about 6 years after the 2nd transplantation. I just wanted to get rid of the extra kilos I gained during the pregnancy. I was using Endomondo application where I just found that my very first run happened on June 9, 2011. I ran 3,12 km in 22:57 mins with avg speed 8,1 km/h.

The first competition I ever joined was Prague Mattoni Grand Prix, run for 10 km on September 10, 2011, so about 3 months after my first run. I finished it in 1h:08m:34s with avg speed 8,9 km/h and felt very good. I was convinced that I would continue with training, join some more 10 km competitions and than I would go for half marathon. 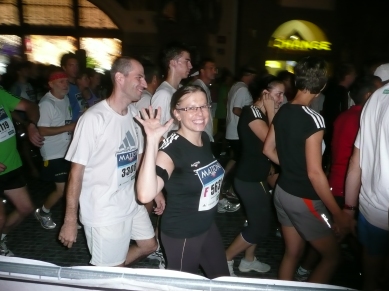 Unfortunately after successfully completing my first competition, I somehow lost motivation and taste to run. Completely. So I didn’t run for several months until I registered myself for another competition again. This story repeated few times…I registered for some race, started to train about one month before it and made few months pause after it.

This changed last year. I cannot exactly say what happened or what caused the change but I suddenly started to enjoy running and instead of running to loose weight, I started to run because I was enjoying it. I started to run more and more and also started to read articles about how to train properly, how to rest, stretch, eat, etc. I just fell in love with running!

I also joined some running communities. The first one and to be honest the one closest to my heart is called “Wonderful women in run”, where we support each other not only in running. There are women (and also few men) who have just started and are happy for completing 1 km run together with those running ultra-marathons or triathlons. You can find information about this great bunch of people here (http://www.bajecnezenyvbehu.cz/) but the page is in Czech only.

Among other activities we created group of people who finished the whole running series named RunTour which is being held in various cities around Czech republic. When you participate in 7 of 8 races, you become so called Golden RunTour Master and receive a glass ball trophy, special t-shirt and a medal. And we did! Together. It felt awesome!

To be honest, lately I became a bit too much obsessed with achieving goals and forgot to take care more about my health. So at the moment my body is at strike and wants me to think more about my boundaries. I described it in the article Wake up call. I have to think more about what is still safe for me to do and what is already too much as I really don’t want to go back to dialysis.

But I love running! And I am not going to stop. The feeling is irreplaceable, nothing brings me the same joy and source of positive energy 🙂